The Bowflex SelectTech 552 is a set of dumbbells that work well for the beginning althlete or someone who has a limited upper body strength. They are lightweight and easy to use. The Bowflex SelectTech 1090 set provides you with a wider range of weights and exercises, though they are aimed more at the professional weight lifter or someone with a more developed upper body. 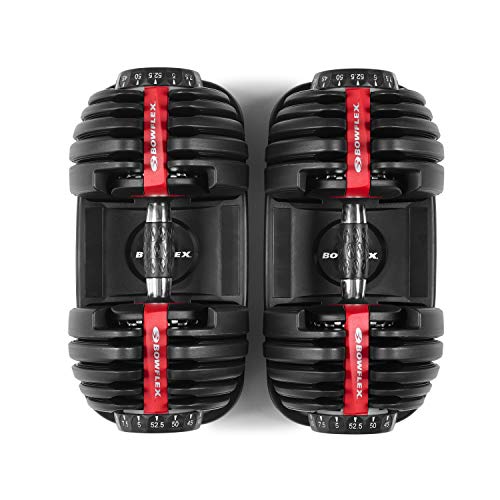 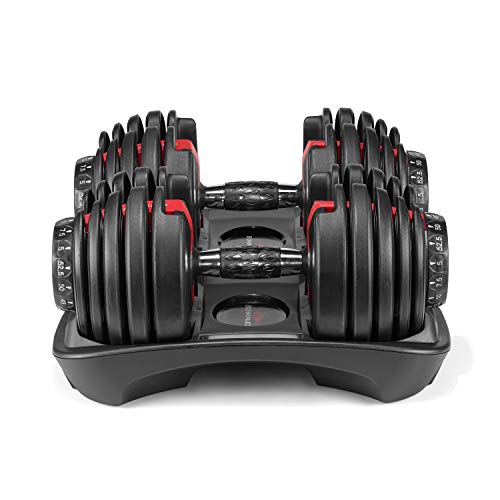 The Bowflex SelectTech 552 is a set of adjustable dumbbells that you can set from five to fifty-two and a half of pounds. You can adjust the set in increments of two and a half pounds so that you can set up your workouts gradually up to twenty-five pounds; then, the weights increase by five-pound increments. You can use them to change exercise with fifteen different combinations of weight quickly.

Using the 552 dumbbells can help you eliminate the need to have multiple sets of dumbbells cluttering up your home gym. Each dumbbell comes with a tray that holds the dumbbell until you need to use it. The dumbbells come with enough weights to amount to thirty-pound weights.

You can adjust your weight sets to be able to do over thirty different exercises with different weight limits. You can alter the exercises for leg, back, chest, shoulder, and abdominal exercises that meet your workout needs. The Bowflex 552 dumbbells come with an accompanying app, so you can track your progress and journal your workouts.

The Bowflex SelectTech 1090 using the 1090 series of dumbbells can give you seventeen sets of dumbbells in starting at ten pounds up to ninety pounds total for each dumbbell. The range can help you increase your capacity by five-pound increments. You can adjust the weights using the dial system that tightly holds each set of weights.

The design of the weights helps you save room in your workout room and make changing exercises quick and easy. The weights come with a molding that holds each weight and prevents them from making noise during your workout. The 1090 designation indicates that each barbell can give you a range of tent pounds to ninety pounds with a combined maximum total of one hundred eighty pounds of weight together.

The Bowflex 1090 can help you do multiple types of exercises, from lunges to arm curls. The design of each weight lifts out when not in use, and the dial locks the remaining in place. The Bowflex 1090 comes with a three-year warranty for parts. 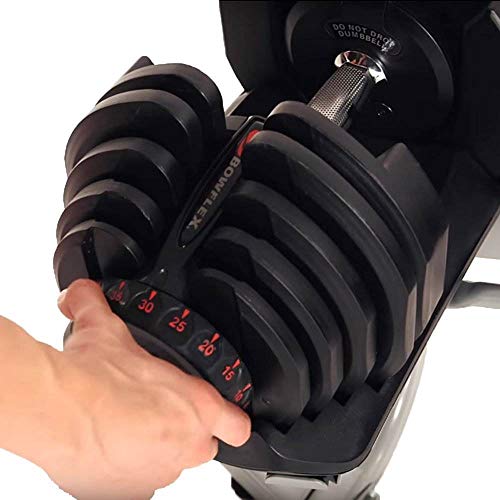 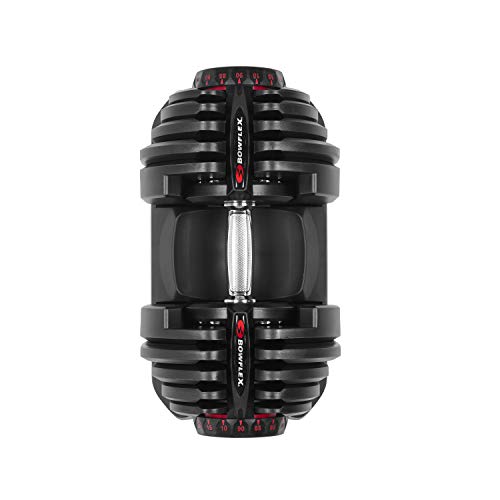 Both sets of weights show are adjustable dumbbells that come with a lock. You set the weight to your workout and use the lock to hold the remaining plates in place. They both have a similar design in frame and weight locks. Because they have the same manufacturer, there are few physical differences between the weight sets, with only the Bowflex 1090 having a more reinforced handle for the additional weight.

Both sets of weights come with the accompanying Bowflex SelectTech app, which allows you to track your workouts, create your workouts, and follow your progress.

While made by the same company, there are differences between the two sets of dumbbells. The main difference is in the weight with the Bowflex 552 are lighter weight dumbbells with a range of five-pounds up to twenty-five pounds per dumbbell. They increase in two and half step intervals and offers you fifteen different sets of exercises. They are also more cost-effective than the heavier 1090 version.

The Bowflex 1090 uses weights starting at ten- pounds and working up to ninety-pounds per dumbbell with increments of five-pounds. The differences continue with the 552 giving the user only fifteen different sets of weights to the 1090s seventeen different sets.

The difference in the sets depends on the user's fitness levels and degree of familiarity with weights. The Bowflex 552 is more of a beginner's set, designed to introduce people to unfamiliar and new exercises. It is also a set designed for people with limited upper body strength. The intervals are smaller, making advancing easier with two and a half-pound increments.

The Bowflex 1090 is a more advanced set of barbells. As they are heavier, they are for people who are familiar with weight lifting and have a fair amount of upper body strength, to begin with. The intervals are five-pounds apart for a greater gradual step up. The Bowflex 1090 set of weights is bulkier than the Bowflex 552 because the weights are bigger.

While neither product is perfect for all people, there is a lot of differences for both products in terms of the good and the bad.

The Bowflex SelectTech 552 weights are some of the best weights you can start with as a beginner. You can invest in a single set of adjustable dumbbells and get multiple exercises without the need for taking up a ton of room in your at-home gym. They do have their good and bad points, though.

The Bowflex SelectTech 1090 dumbbell set is the perfect thing for the advanced weightlifter. They give you the weight and the versatility of a set you can use through multiple exercises. They can help you achieve higher workout goals, though they do have their problems as well.

Working out is very good for long-term health. It is also good to build muscle. Both types of Bowflex products will help you do this, but the Bowflex SelectTech 552 comes out on top for usability for most people.

You Should Consider the 552 if:

+ You prefer the more affordable option

+ 52.5 lbs is more than enough to power your workouts

+ You have a higher budget

+ You prefer a slightly sturdier machine with a longer warranty

link to What Are The Benefits Of Using A Cable Machine?

Having a workout routine plays an essential role in leading a healthy life, so whatever you do as exercise will bring you benefits. However, if you want to take it to the next level and build up some...

Continue Reading
link to Cable Machine Vs Free Weights: What are the Weight Training Differences?

If you intend to start working out, you might wonder about the most proper ways to do that in order to achieve some real results. There are different options for working out, and when you are trying...